In my position at Rackspace, I tend to spend a lot of time using OpenStack's instance of Gerrit to review proposed changes. When reviewing OpenStack changes, I prefer keyboard shortcuts and terminal interfaces so I can explore the affect of a change via my preferred text editor. To accommodate this workflow I use Gertty. [1] I run it inside tmux so that I can switch to another window and look at the code using vim and tinker with the tests. [2]

And as far as preferences go, I use the Solarized theme created a few years ago by Ethan Schoonover for pretty much everything. Naturally, I use Solarized in my terminal emulator of choice on whatever operating system I happen to be using.

If you're familiar with terminal-based applications, you know they can change the color of pieces of text and indeed Gertty takes advantage of this. I've encountered a problem with Gertty's default colour palette: it is not readable with Solarized. For example, if you try to list all of the projects in OpenStack (including the ones you are subscribed to) it looks like this: 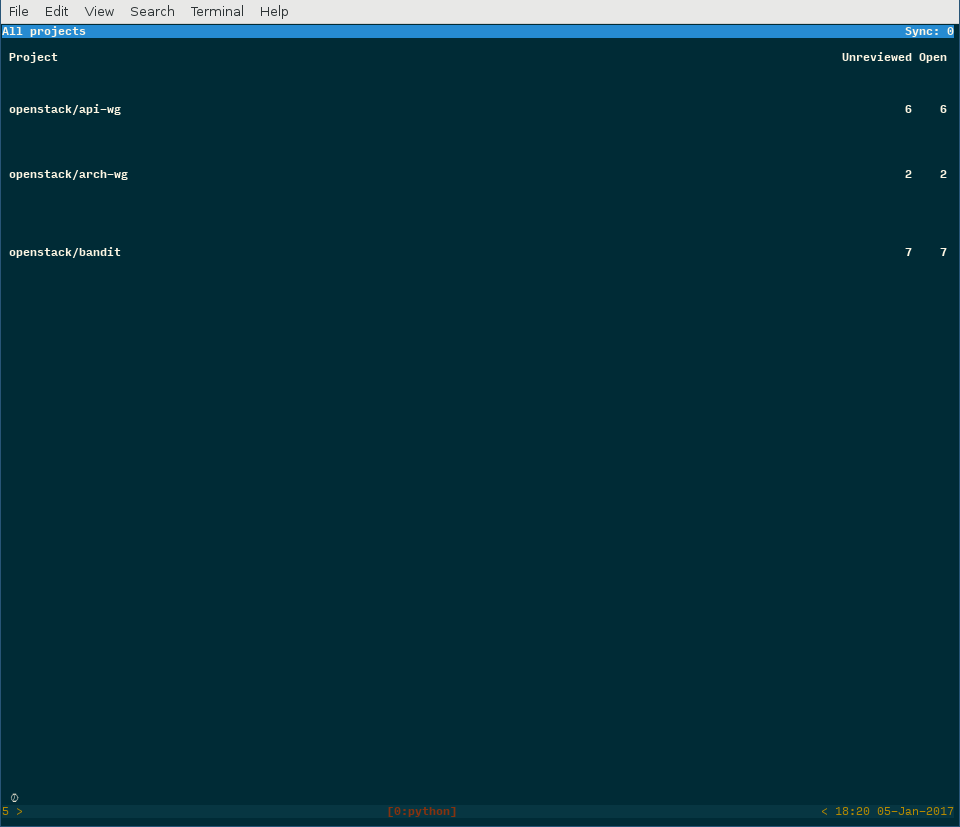 Further, some of the content in reviews is not ideal for use with the Solarized theme (line numbers, for example, are not legible). So, I spent a little bit hacking, and was able to come up with a usable (but not great) palette for you to include in your Gertty configuration.

With this palette I can now see projects there were previously hidden: 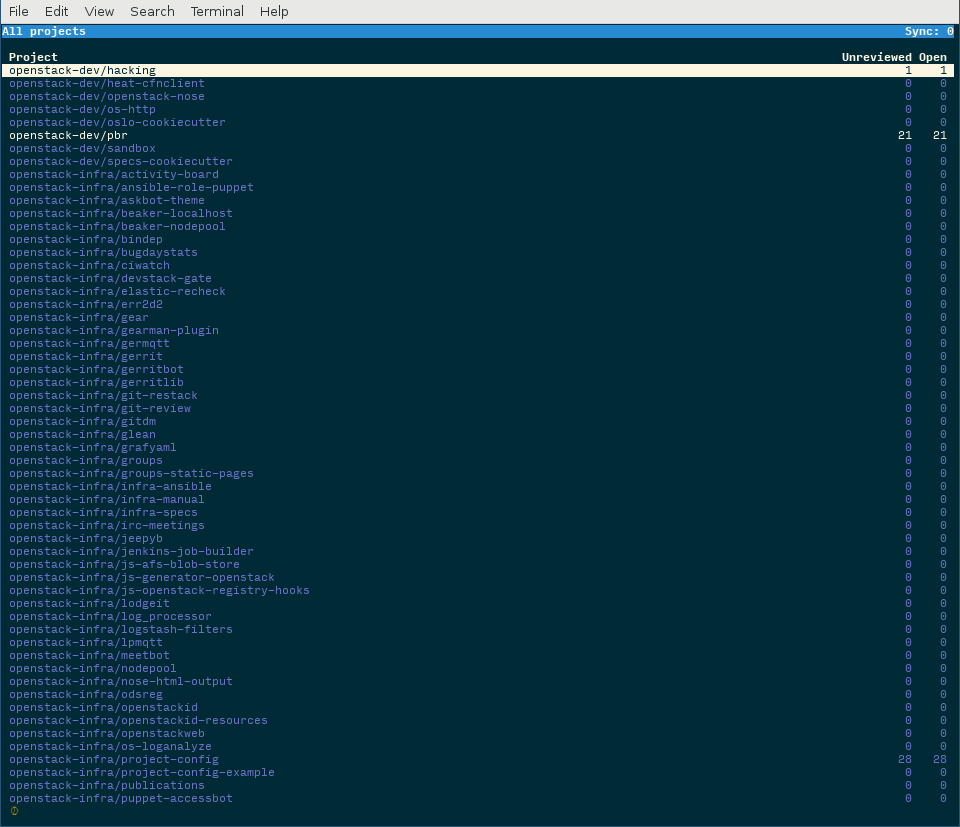 If all you came here for was a working snippet for the Solarized color them, I suggest you stop here. If you're interested in how the above works, read on!

In case you're not familiar with YAML, the above snippet defines palettes as a list with a single object (dictionary, hash, or whatever you want to refer to that as). We could absolutely define more than one palette in this list. We would just have another list item (denoted by a -) after the end of the first palette and we would begin again in a similar vein. That would look like:

Each palette for Gertty requires a name; in our case we use "solarized". Everything else in our object now refers to the styling of some piece of the interface. The interface name is on the left (e.g., comment, comment-name, focused-filename, etc.) and the styling for that element is on the right (e.g., ['dark blue', ''], ['white,bold', ''], ['light magenta,bold', 'white']). We can get a comprehensive list of interface names by running:

Figuring out which colors is not as simple, but luckily not difficult. First, we need to realize that Gertty relies on Urwid to handle drawing it's interface in a terminal. If we know how Urwid deals with colors, we can then start tinkering with our palette. Fortunately, Urwid's documentation is pretty good in this respect. So the last bit of information to understand is the fact that each interface takes a list of foreground and background colors to apply to it's element. Let's look at examples.

The [ and ] denote a list (or array) here. Inside we have two strings:

In this case, the foreground color will be white and it will be made to look bold. Finally, we have:

With the above understand and Urwid's color documentation, you should now be able to write your own palette for your favorite colorscheme. 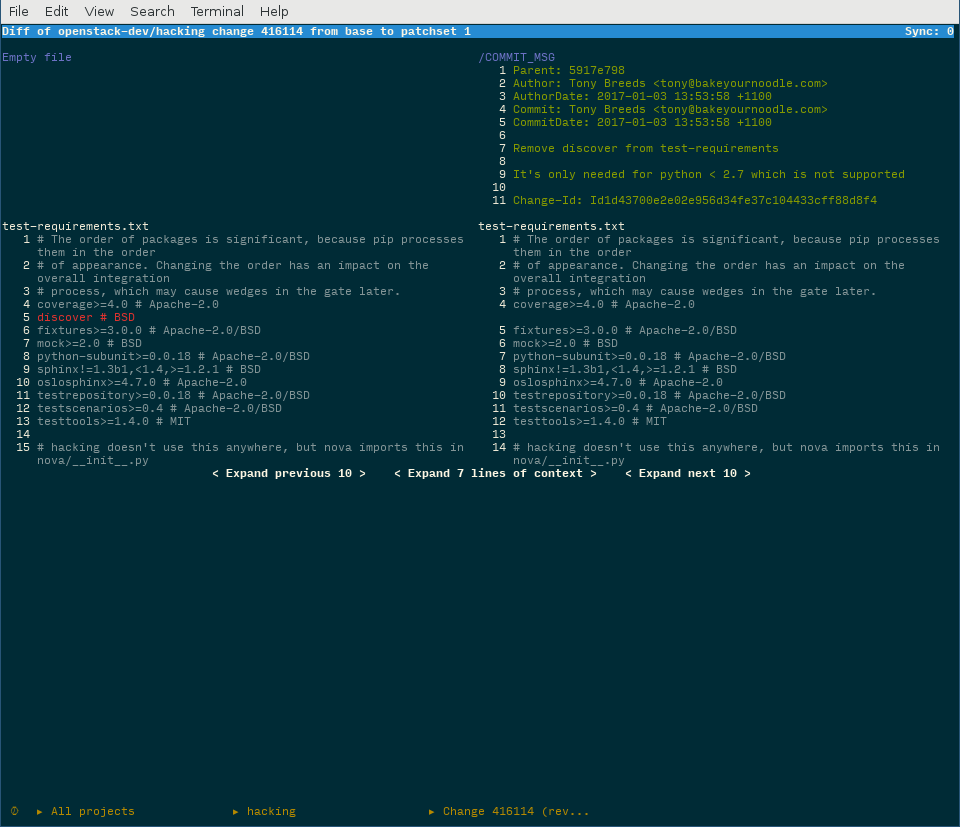